Does Infertility Cause Stress?

Patients with infertility experience a significant amount of emotional distress as the result of their diagnosis. The inability to reproduce can cause feelings of shame, guilt, and low self-esteem. These negative feelings may lead to varying degrees of depression, anxiety, distress, and a poor quality of life.

Does Stress Cause Infertility?

Whilst it is clear that infertility causes emotional distress, it is not so clear if stress causes infertility. We know however that people behave differently when stressed, and some of those stress induced behaviours can impact fertility:


We also know that the physiological response to stress (through the HPA and HPT axis) can impact reproductive hormones.

The hypothalamic-pituitary-adrenal axis (HPA) refers to the relationship between the hypothalamus, the pituitary gland and the adrenal glands. It plays a key role in basal homeostasis and in the body's response to stress.
When faced with a stressful situation (either physical, immunological or psychological), the brain initiates a cascade of events involving the HPA axis. The hypothalamus signals the pituitary gland to produce a hormone, which in turn signals the adrenal glands (located above the kidneys), to increase the production of glucocorticoids, including cortisol (known as the stress hormone). Cortisol increases the level of energy to help us cope with the stressful situation.


Glucocorticoids are important for regulating the immune system and reducing inflammation. While this is valuable during stressful or threatening situations where injury might result in increased immune system activation, chronic stress can result in impaired communication between the immune system and the HPA axis. This impaired communication has been linked to the future development of numerous physical and mental health conditions, including chronic fatigue, metabolic disorders (e.g., diabetes, obesity), depression and immune disorders. 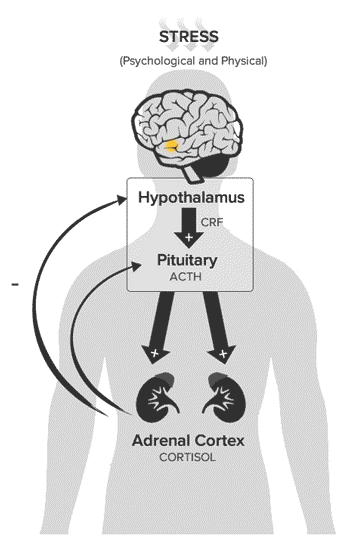 A different pathway, called hypothalamic-pituitary-thyroid (HPT) axis is also responsible for some stress response. It refers to the relationship between the hypothalamus, pituitary gland and thyroid gland.


This axis is largely genetically determined but may also be malleable to environmental demands such as psychosocial stress. HPA production of CRH and cortisol, suppresses HPT production of TSH and prevents the conversion of T4 to T3. 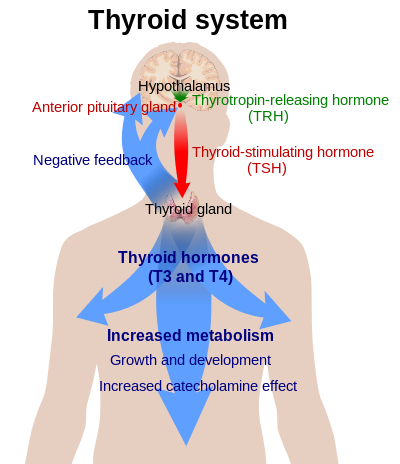 The hypothalamic-pituitary-gonadal axis (HPG) is an important part of the reproductive system. It regards the relationship between the hypothalamus, pituitary gland, and gonads (ovaries and testicles). The hypothalamus produces Gonadotropin-releasing hormone (GnRH). This induces the synthesis and release of follicle-stimulating hormone (FSH) and luteinizing hormone (LH) from the pituitary gland, which trigger testosterone release from the testis and estradiol and progesterone release from the ovaries. A feedback loop exists whereby gonadal hormones communicate and impact with hypothalamus and pituitary hormones.


There exists a reciprocal relationship between the hypothalamic-pituitary-adrenal (HPA) and the hypothalamic-pituitary-gonadal (HPG) axes wherein the activation of one affects the function of the other and vice versa. Increased levels of glucocorticoids (like cortisol) promote gluconeogenesis, mobilization of amino acids, and stimulation of fat breakdown to maintain circulating levels of glucose necessary to mount a stress response. In addition glucocorticoids affect gonadal function at multiple levels in the hypothalamo-pituitary-gonadal axis: 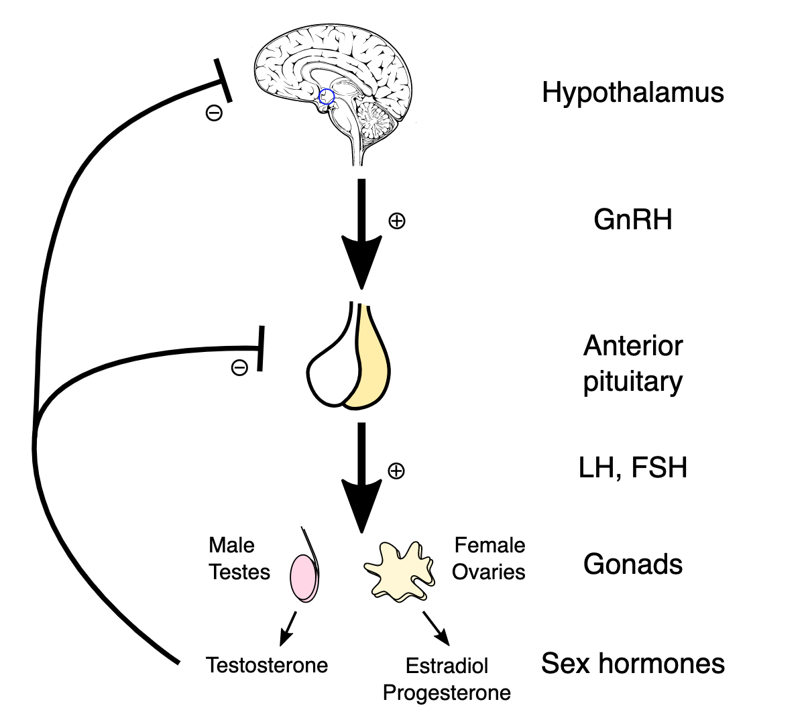 It is believed this happens in consequence of the HPA production of glucocorticoids which upregulate Gonadotropin-inhibitory hormone (GnIH) release in the hypothalamus. GnIH is thought to reduce pituitary gland production of LH and FSH which in turn impact gonadal production of oestrogen and testosterone.

There is also a relationship between the hypothalamic-pituitary-thyroid (HPT) axis and the hypothalamic-pituitary-gonadal (HPG) axis. High concentrations of thyroid hormones (hyperthyroidism) decrease expression of GnIH, whilst lower level of thyroid hormones (hypothyroidism) increases GnIH expression.
Increased GnIH expression caused by hypothyroidism, reduces circulating levels of gonadotropins (LH and FSH) and gonadal hormones. In clinical practice, a TSH level of 5mU/l or greater is indicative of hypothyroidism. A TSH level less than 5 mUl but greater than 2.5mUl is associated with implantation failure and early pregnancy loss. 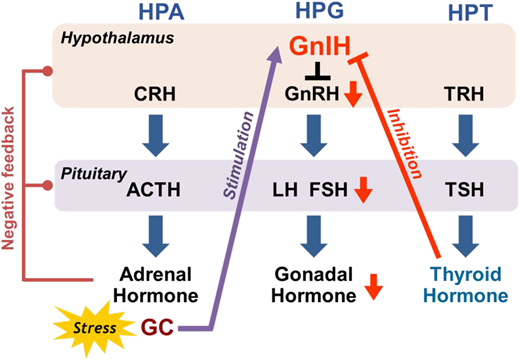 Impact of Stress on Trying To Conceive

The impact of stress is not only physical as shown above. Psychological symptoms have a negative impact on fertility and on couples' experience of trying to conceive. Research shows that:

What interventions can help manage stress

Research has documented the efficacy of psychological interventions in lowering psychological distress as well as being associated with an increase in pregnancy rates. Self-administered cognitive coping mindset exercises, relaxation intervention, yoga, meditation, some forms of mindfulness, expressive writing and keeping a gratitude diary can be helpful.

Professional guidance in a cognitive-behavioral group approach may be the most efficient approach. This must include an emphasis on education, skills training and relaxation training. Men and women benefit equally from these interventions.
Find the Evidence